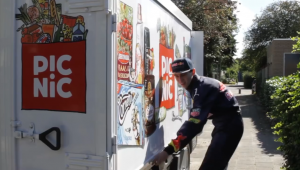 The Amsterdam Court of Appeal ruled that Picnic was allowed to use a lookalike of Formula 1 racer Max Verstappen in a video after all. This turned the tide for Picnic, which was ordered by the court in first instance to pay a compensation of € 150,000 because of the use of the lookalike.

Picnic is an online supermarket that delivers groceries to customers’ homes. It has a Facebook page on which short videos and gimmicks are regularly posted.

In September 2016 Picnic posted a video on this page with the title “if you’re on time you don’t have to race”. In this video one can see a lookalike of Max Verstappen delivering groceries of Picnic. The lookalike wears the same kind of racing outfit and cap as Max Verstappen.

At the beginning of the video the lookalike walks past a delivery van of another large Dutch supermarket chain called Jumbo, and then gets into a Picnic delivery van. This is no coincidence, since Max Verstappen already performed regularly in commercials Jumbo at the time. The lookalike then drives – as a pit stop – past Picnic’s distribution center and delivers Picnic’s groceries at home.

Max Verstappen found the video less successful and went to court. The judge had to answer the question whether Picnic violated his image right or acted unlawfully towards him in any other way.

The ‘image right’ is regulated in Article 21 of the Dutch Copyright Act (Auteurswet) and, in short, it means that someone can oppose the publication of his image if he has a reasonable interest in doing so.

The court found in favour of Verstappen and ordered Picnic to pay a compensation of € 150,000. But Picnic successfully appealed against this judgement.

But it is sufficiently clear to the viewer that this is not the real Max Verstappen, but a parody of his performance in the Jumbo commercials.

The court of appeal also ruled that the video is not unlawful towards Max Verstappen on other grounds. It did not find it plausible that Max Verstappen will be associated with Picnic’s activities as a result of the Facebook video and that the public will think that he supports Picnic’s services. Nor is the lookalike portrayed in a way that could harm Max Verstappen’s reputation or his popularity with existing or potential sponsors or other contract partners.

The mere fact that a well-known person has a “redeemable popularity” does not automatically mean that imitating that person in an (advertising) video is unlawful when there is no confusion about the identity of both persons.

This is no different if the party who posted the video has a commercial interest in doing so. In order to find such a post unlawful, additional circumstances are necessary.

The court of appeal does not believe that Max Verstappen’s business interests have been harmed. In fact, Jumbo extended the contract with Max Verstappen shortly after the publication of the video.

The court of appeal quashed the court’s decision and Max Verstappen’s claims were rejected after all.

Observations on the judgement

This judgement was certainly not a runaway race for Picnic. In August 2017, the Court of Amsterdam found in another case that the skin of “Striker Lucian” in the computer game League of Legends violated the image right of former footballer Edgar Davids.

Unlike in the Picnic case, the face of “Striker Lucian” was clearly visible in the computer game. That face – with a dark skin colour, black dreadlocks and sports glasses – evoked, in combination with other elements, the image of the former footballer. In the Picnic case, the court explicitly noted that “the video ends with the laughing lookalike filmed from the side” and that “the face or the person of Verstappen himself is not depicted”.

Would the court have ruled that an image within the meaning of the Dutch Copyright Act would have existed if the face of Max Verstappen’s lookalike had been shown more clearly in the Facebook video? That is not certain.

According to the Dutch Supreme Court, it is not necessary that the eye party is visible when invoking an image right. A characteristic posture can also contribute to the recognizability of the person portrayed, according to the Naturiste-ruling. In the Breekijzer-ruling, the Supreme Court even ruled that “from what that image shows, the identity of that person may also be apparent”. Of course, these two judgements do not alter the fact that the Picnic case was about a lookalike and not about the “real” person. That could be a decisive difference.

Nevertheless, in preliminary relief proceedings in 2005, the court of Breda found a lookalike of Katja Schuurman (a dutch actress), depicted from behind, to be an infringement of her image right. It is striking that the judge in this case speaks of “not quite a portrait” (in Dutch: “net-niet-portret”), but still assumes that there is an infringement of the image right in the sense of the Dutch Copyright Act. That case could have ended differently on the basis of the judgement of the Court of Appeal of Amsterdam in the Picnic case.

The Court of Appeal also noted that Jumbo might have been able to oppose the imitation. Jumbo could then have invoked Article 6:194a of the Dutch Civil Code (unlawful comparative advertising). But Jumbo did see the humour of the video. Therefore, we do not expect Jumbo to file a claim against Picnic. Moreover, this would also give Picnic extra attention. Something that Jumbo is probably not very keen on.

In the aforementioned case about the lookalike of Katja Schuurman, the appeal of Gouden Gids (a directory for companies) on article 6:194a BW was successful. The judge found that there was in fact unlawful comparative advertising. Among other things, it was important that the publicity of the recent advertising campaign of Gouden Gids was taken into account and the public was called upon to turn their backs on Gouden Gids in the commercial with the lookalike. This damaged the good name and reputation of Gouden Gids.

Contrary to copyright law, under trademark law it is possible to take action against taking unfair advantage of well-known trademarks without the need for confusion. In the Picnic case, however, no trademark right was invoked.

Do’s and dont’s when using lookalikes

Using a lookalike in advertising is not without risk. The case law is rather unpredictable. Below are a few suggestions that can give some direction in general.

Would you like to know more about image rights or comparative or misleading advertising? Or do you have other questions about copyright law, advertising law or trademark law? Please contact Ernst-Jan Louwers or Lisa Molenaars.